so peter has posted the pcb for the new labrolz. i emailed him to inquire about other instruments that could have vca+mixing capabilities, and he mentioned that the new rolz will have vca, vcf, and stereo mixing along with the sound generator.

i've had some fun trying to interpret the pcb and wondered if anyone else would like to join in. i haven't used the rollz5 or roolz gewei, so i don't know what exactly each section is and can only pick out components by a/b'ing it with the cocoquantus pcb. 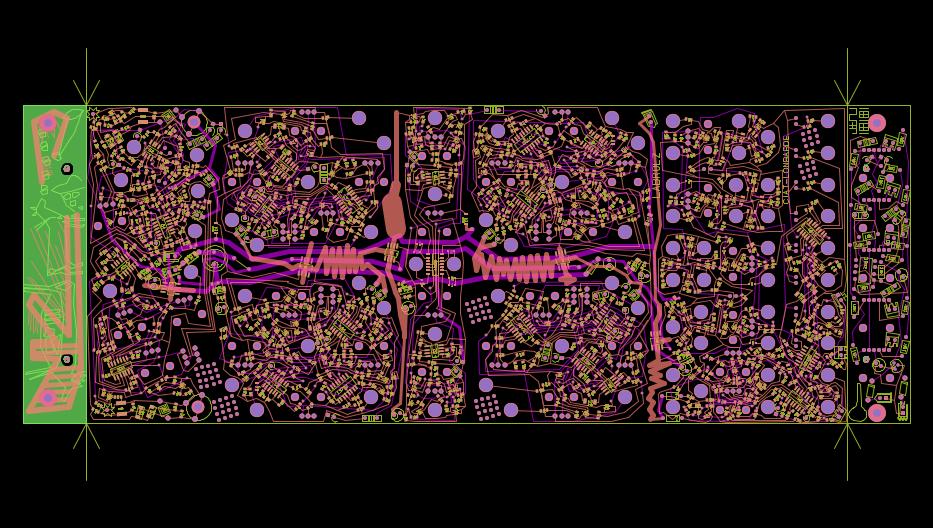 going right to left: the right-most side is the 5 channel stereo mixer. it's unclear to me whether these are node-style or 1/4" inputs. i'm assuming nodes, since peter said that there are 7 1/4" inputs on the front of the instrument.

i believe the row of 10 circles are nodes, but can't tell if they're ins or outs.

then, top to bottom, there are a series of four node/ pot combinations (five or six nodes to one pot) with the fifth one at the bottom have either two pots to the five nodes or one pot with an extra pot for ???. no clue what this could be, but the count doesn't seem to match the roolz gewi.

the following sections are flipped and mirrored: four pots, seven nodes, one DPDT switch. i think this may be 2 out of the 4 center sections of the roolz gewei.

center: six nodes, four pots. could be based on the right and left edges of the roolz gewei.

potential other 2/4 center sections of roolz gewei, identical to previous ones.

four pots, nine nodes, two ??? things (circles with thin circle and satellites around them), and one DPDT switch. can't match this pattern to anything.

what do you guys think? i know a few of you have greater experience with his circuits. i'm wondering what the small banks of 4x4 dots are, along with those two little circular satellites on the left side.
Top

yes, left side is deerhorn
Top

i was hoping you'd spill some secrets! glad to hear there's a deerhorn on here.

care to share anything further about the vca/ vcf stuff? is the roolz gewei/ rollz-5 made up of a series of vcfs?
Top

All the purple circles are banana jacks.

well the one thing i can tell you about it is its going to be freakin' incredible! i don't want to spill any beans but just to summarize what peter's already said publicly about it - a re-design of the roolz-gewei featuring voltage control of all parameters including the geometry rollz themselves, inclusion of a new module, the man with the red steam, for snare and random dust, inclusion of a 5-channel stereo mixer, analog math... there's a lot lot more but i'd rather wait until peter himself unveils it.

Actually on the classic rollz/roolz all three sound generators (gongs, avdog and ultrasound) utilize filters in their designs. as mentioned the new labrolz will open these up for voltage control to a much greater extent.
Top

very cool. i suppose that the circuit next to the deerhorn may be the new design. the inclusion of the stereo mixer is good, especially since there are so many sound options now.

did the sound generators on the old rollz have filter inputs, or were they just used to create the sound?
Top

you can use the ultrasound filters on the roolz-gewei by patching, say, a sidrazzi output directly to the node. the other modules just have trigger inputs for the rollz pulses similar to the 'trig in' on the serge VCFQ
Top

i see. sounds like a lot of fun, and i can't wait to see how this turns out.

i have to say, despite a lack of fanciness, i'm most charmed by the stereo mixer. if it was a little larger, even 8 channels, i'd be extremely excited. i would love an 'in-house' way to mix all of my c-l instruments together.
Top

There's a couple sneek peak videos of it on his youtube page, it sounds great so far!
Top

i think i need one of these when they're ready.
Top

bartlebooth wrote:you can use the ultrasound filters on the roolz-gewei by patching, say, a sidrazzi output directly to the node. the other modules just have trigger inputs for the rollz pulses similar to the 'trig in' on the serge VCFQ

maybe you can expound on this a little-- peter has said that there will be direct input into the filters on the lab. how many filters were in the roolz-gewei?
Top

bartlebooth wrote:you can use the ultrasound filters on the roolz-gewei by patching, say, a sidrazzi output directly to the node. the other modules just have trigger inputs for the rollz pulses similar to the 'trig in' on the serge VCFQ

maybe you can expound on this a little-- peter has said that there will be direct input into the filters on the lab. how many filters were in the roolz-gewei?

in the roolz-gewei by patching directly to the input nodes for the ultrasound you can access the internal filters and also use the knobs to control the filters' frequencies. so you can patch your tetrazzi for example into ultrasound filters but you'd need to make some 1/4"-to-alligator cables. for the labrolz peter is greatly expanding the CV options so not only will you have CV control of the filter parameters but also aux inputs on 1/4" jacks for the various modules (including the gongs and avdogs which both utilize resonant filters in their designs).
Top

yep, i was aware of the aux inputs-- it's a great idea--but i'm curious how many resonant filters are in the instrument.
Top

The Rollz 5 is played by patching the "roll nodes" into three different filters. They really arn't typical resonant type filters. The controls are more esoteric, usually one knob for decay. The Ultrasonic filter has a cutoff knob, it sets the point at which the radio ultra sound is mirrored into audio. There's the Gong- which is a low plucked tone, the Ultrasound which hydrodynes supersonics, and the AVDogs that bark subsonic.

It's best to think of them as Rollz Tranlators, rather then filters.


sgnhh wrote:yep, i was aware of the aux inputs-- it's a great idea--but i'm curious how many resonant filters are in the instrument.

peter suggested to me that they'll be usable as normal filters on the labrolz, so ... ???
Top

if that doesn't work out, i'll have to try and find a stuber
Top

Yah, I'm just talking about the old school Rollz 5, which the Gewei is two of.

The Stuber looks great! I love the idea of running the oscillator that drives the filter through a binary divider for self fuckt modulation. Similar to the Cocostuber, but that uses the delay clocks instead.
Top

[video][/video]
magic from space
behind you
Top

be sure to check the liner notes, they are a good read
Top

wait, where are liner notes available?
magic from space
behind you
Top

here you go my young friend:

i definitely need one of these!
Top

and thnkx sandy, the blank appeared in like 3 fucking days!
magic from space
behind you
Top

wow, i cannot wrap my head around this. why bananas at this stage of the game? seems odd that it won't incorporate directly with the other stuff without adapters. it looks gorgeous though. the colors are great!
magic from space
behind you
Top
Post Reply
321 posts