The next 4U module from 1979 is the DSD (Digital Stereo Delay). This is a collaboration with Alright Devices to bring a fully-featured digital delay unit to the Buchla format.
Modules are currently in production, shipping sometime in May. Visit https://1979.ws/digital-stereo-delay to preorder. 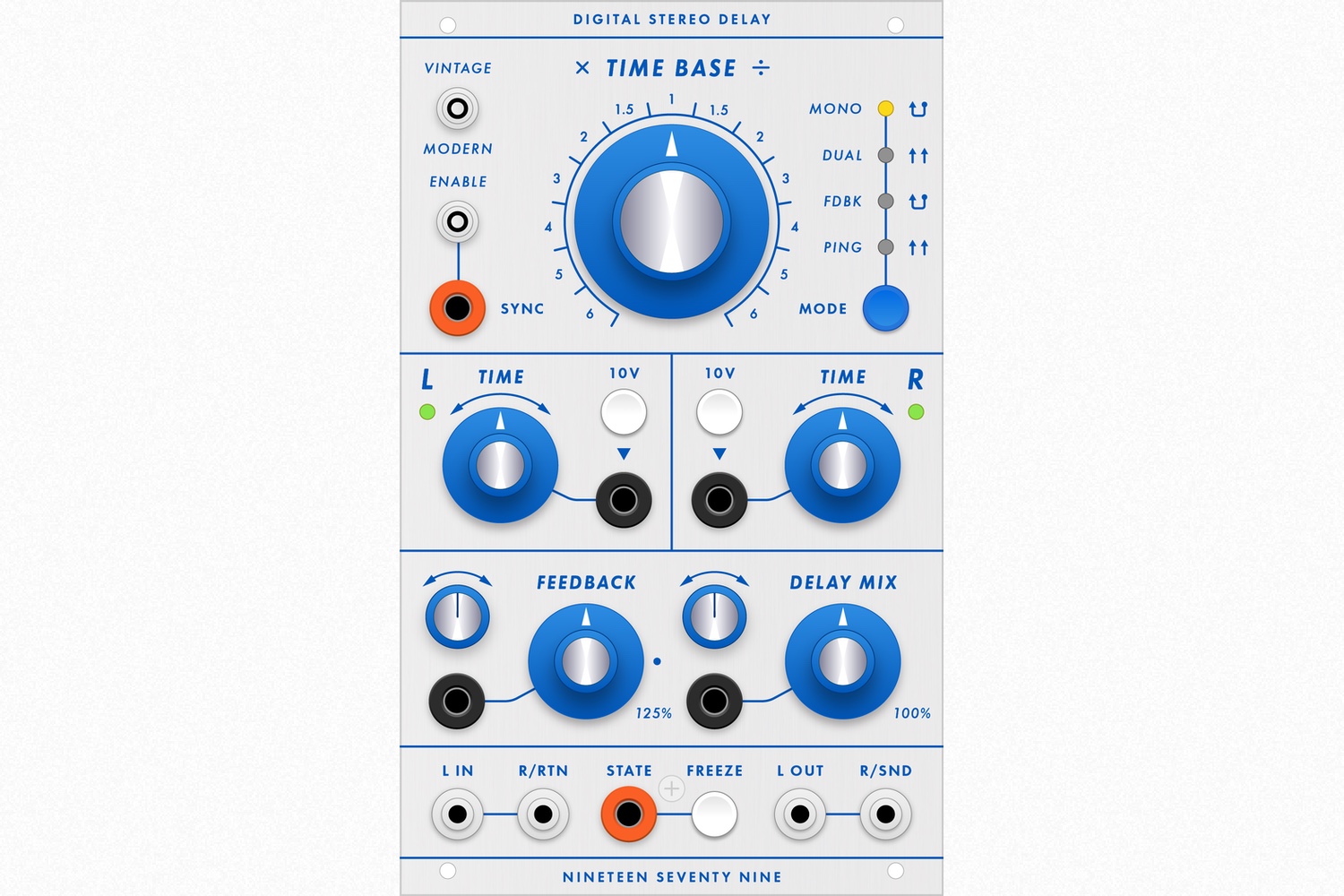 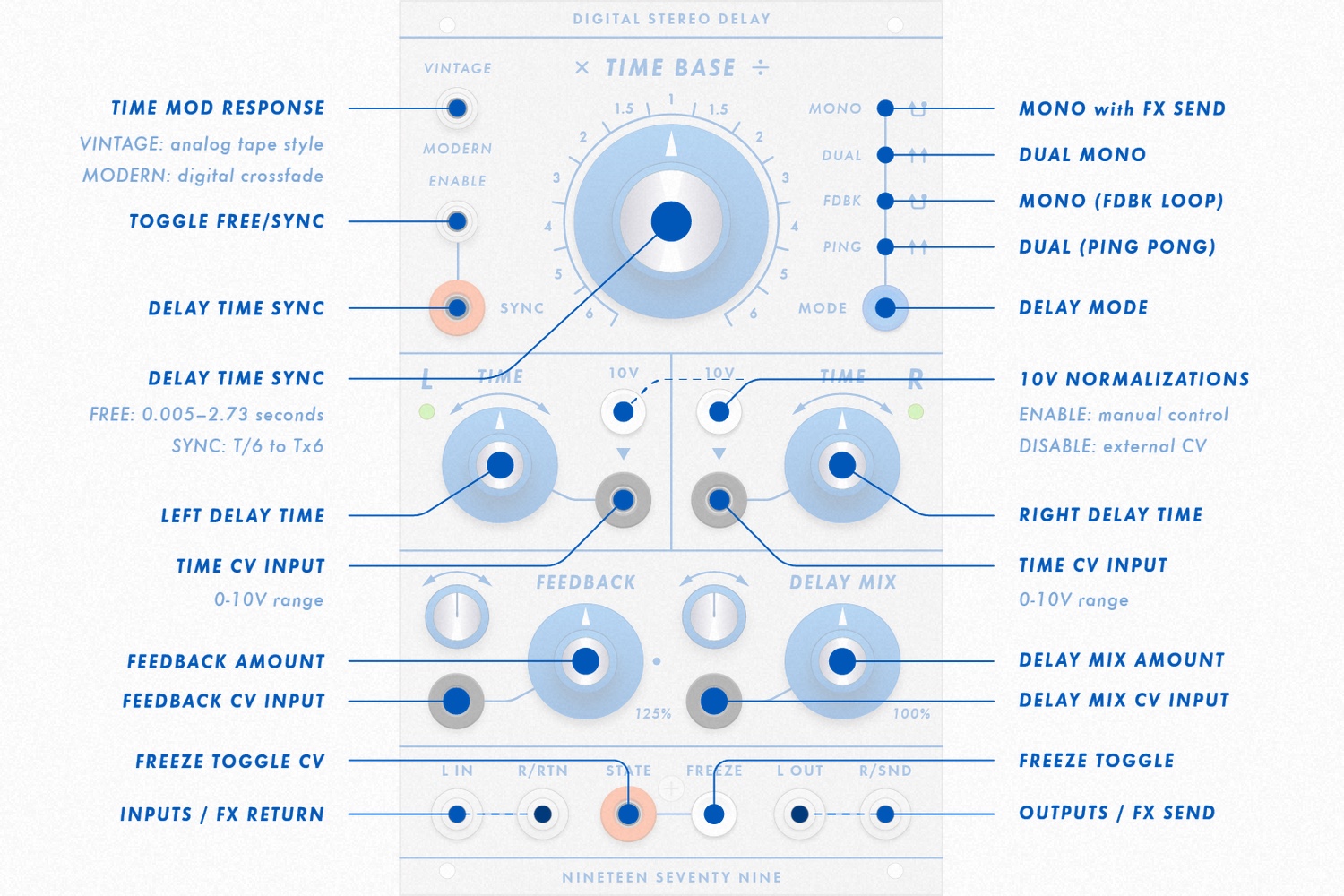 well that looks absolutely wonderful. i love the clever and suitably Buchla-esque quirkiness of the Time Bass control.

just curious, what is the filter module to the right? a new prototype?
Top

Sweet! This will fill the hole left open by those still hoping for the Modcan conversions.
Top

Thanks for the positive feedback.

Yeah, that's the latest DSVF (Discrete State Variable Filter) prototype. No ETA for that one yet.

Yeah, that's the latest DSVF (Discrete State Variable Filter) prototype. No ETA for that one yet.

I preordered my DSD. Thanks for the great sale!
Buchla podcast: http://sourceofuncertainty.audio
Top

is there a chance to hear some more audio examples?
Top

Is this essentially Chronoblob folded out into a 4U Buchla design? Meaning the chips are basically the same, the signal path, the SMT board style... is it through hole? It's the price of through hole. The same algorithm? Essentially, is there any difference under the hood?
Top

Haven't posted any updates on this one lately since I wanted to get a firm shipping date from my assembler first... they are in California and manufacturing facilities there have mostly been allowed to reopen as of this week. Thanks to those who preordered and have been waiting patiently, I expect to start shipping these during the last week of May.

Sure, I am working on more videos and will post those when the modules are in stock. Will probably send one to Todd Barton as well, he has been doing some great demo videos for the 1979 modules.

Yes, as the website states this is a Buchla-format version of the Chronoblob V2. I worked with Tyler from Alright Devices to develop a new PCB design with all the hardware and firmware changes required for Buchla compatibility.
Grayscale [ FB IG SC VM ]
1979 [ FB IG ]
VCV Rack
Modular Shirts
Top

OK. Thanks for letting me know. Not trying to be incendiary, but one has to wonder, is this a 700 dollar version of a 350 dollar module, because the average price of Buchla is 600 bucks a unit? I mean... well. Come on...LOL. How can it be anything other. Is it really that much of a stretch to change formats?
Top

Without knowledge of the manufacturing costs, prototyping costs, number of units sold, market size, wholesale pricing agreements with dealers, and other factors that influence the cost of something like this, why do you feel that you're qualified to comment on the price?
Grayscale [ FB IG SC VM ]
1979 [ FB IG ]
VCV Rack
Modular Shirts
Top

Well, I suppose you're entitled to an opinion, however uninformed and insulting it might be.
Grayscale [ FB IG SC VM ]
1979 [ FB IG ]
VCV Rack
Modular Shirts
Top

I wish the average price of a Buchla module was $600!
Buchla podcast: http://sourceofuncertainty.audio
Top

Please show me where you are getting buchla modules for $600 so I too can be a part of that robbery.
As far as I know, the only new buchla module I know of around $600 is 1979's mixer.
http://www.oddinhuman.com
Top

As I said before I'm not trying to be incendiary or insulting, and I find it a little funny that one little comment about the price markup could be taken so hard. I feel like this falls in line with the Buchla CLONE world even though it's not a clone, as it's a module built by an outsider that is not represented by Buchla, to go into a Buchla system. In that world, it's around 600 bucks a unit (not per module, per unit). I let my bias get ahead of me here, I'm such a NON fan of digital euro modules that there is no way I'd be sold on this approach, so I really have no business commenting here. I appologize for getting involved. I'm not the target audience here. By the way, I do have that 1979 mixer.
Top

Perhaps because the number of folks willing to dedicate the time and mind to contribute to this very niche market are quite few, for obvious economic reasons, and those that are willing to do so deserve a bit of respect - and gratitude, frankly. Whether you intended them to be or not, your comments were pretty insulting and based upon a set of assumptions which simply aren't correct.

First off, the 1979 modules are not clones. Clones are DIY PCB and panel kits that are built to order, not ground up developments brought to market - with all the associated costs which it seems you might not be considering.

It isn't just the R&D time taken to develop the PCB (regardless of whether it's from scratch or re-purposing an existing design) and the panel, but also factoring in the estimated demand before sourcing all the necessary components to assemble multiple modules, testing and QC, advertising/website presence, working with dealers, shipping, etc.

None of those additional factors are relevant to clone designers, and those actually building them are almost universally building to order. Except Terry.

Regardless of whether they're using open source/re-purposed designs or not, if you want to judge the price of 1979's modules then do so against other folks actually bringing completed modules to market - Northern Light Modular, Studio H, Keen, or Verbos.

Even considering someone who almost exclusively designs around re-purposed PCB's - the Vedic Scapes guy - look how much his modules sell for new, and he is pretty much building to order anyway.

Al that said, your original observation that in general Buchla modules are more expensive than their Eurorack peers is valid, and a portion of that is in certain cases almost certainly due the infamous Buchla "mystique". But the vast majority of the difference is simply economy of scale - a builder's price per unit for 10 modules is not the same as for 100.

What I think is ironic in this situation is that of all the players in this niche market, !979's are in fact by far the most reasonably priced. His workmanship is impeccable, his panel designs are simple awesome (in my opinion) and yet his modules are really the cheapest of the commercial Buchla format offerings.

I know this is all water under the bridge now, but I just felt the original comments were really uncalled for.
Top

Also...impossible to diy convert the eurorack format to Buchla with the same interface/finish as the 1979 module for $700 total cost.

So the price is right
Top

Yes - Plus the Mutable Instruments designs fit nicely into the 200e format performance wise compared to their Euro originals. I have a Euro Braids that I tether over to my 200e with a CVGT-1. Levels and CV responses just are not the same even when adjusted to 1.2v/oct. If I had a spare space or two in my Buchla cab it would be taken up by a DAO and the upcoming delay from 1979. Unlike the Cynthia zero osc and several other third party 4U Buchla offerings, 1979 tunes the modules to play sympathetically with B&A modules as to levels and response to CV and pulses in. That's what sets them apart from ported over modules - its an art.
Beatniks and Bongos/Bagels and Bongos/Buchlas and Bongos...

Yeah, don't even get me started about some of the Vedic Scapes ports...
Top
Post Reply
34 posts