I'm in the market for a chorus pedal. I've done quite a bit of research but I'm sure there are a few I've missed. So what are your favorite chorus pedals?
Top

i probably like ehx small clone (which i fancifully think of as going from "syrupy" to "slinky") the best of what i've played guitars through... analog-man bi-chorus pedal sounded very lush too.

not a pedal, but i've always the sound of the roland jc 120 amp's stereo chorus effect (which can also sort of be had in the form of the rs-505 paraphonic keyboard's external input) very pleasing.

cheers
"the ordinary will ignore whatever they cannot explain as if nothing ever happened. and everything remains the same again..."
Top

I've got a Small Clone in the 70's that I've always used. The thing I use the most now is my El Capistan. Sure, it's a delay, but that wow/flutter control adds a beautiful chorus to my guitar. Here is a sample from an unrelated video I did. Just a guitar through he Strymon and into a 1 watt tube combo amp.

Lot of choices.
If I have water in my ear, is it safe for me to listen to electronic music?
Top

TC Electronic SCF is worth a look.
http://udbhavgupta.com
Top

the cluster flux is lush as hell, the stereo out is a beautiful thing as well.
www.soundcloud.com/insergent ||
http://insergent.bandcamp.com
Top

I'm no chorus expert, but I like my EHX Poly Chorus. It's good for pads and pinged sounds. Bit noisy, but that's analogue ...
http://navsmodularlab.blogspot.com/
http://basicelectricityberlin.blogspot.com/
Top

udbhav wrote:TC Electronic SCF is worth a look.

Oh yeah! I need to get another of these. This one cleans up in the chorus department. Whenever I hear a guitarist with a chorus sound I really like, they're almost always using one of these.
flickr cloud of sound touyube NOT A MODERATOR ANYMORE
Top

m0rb1d wrote:the cluster flux is lush as hell, the stereo out is a beautiful thing as well.

agreed! Plus you get flanger, vibrato, and slight echo effects not to mention it can be a synth all on its own

Strange but true: ask any pro-guitarist about his favourite chorus. 70% of them will answer: "Arion Stereo Chorus"!
Mike Landau totally relies on it, in fact it doesn't sell cheap anymore, check the net!

Not a pedal, but the chorus button on my JX-3P can do wonders. It can be the magic button on certain patches.
Top

back in my guitar-only days, i used a danelectro cool cat which i actually rather enjoyed, as well as some DOD that was pretty noisy. Cool cat was alright, and very cheap.

these days i have only the Boss bass chorus - purchased entirely for peter hook noises, but works very well on synth it seems. additionally the RDS7.6 and a bevy of delays can be turned to for chorus - but it's never really an effect that i've gotten terribly creative with.

i'm looking heavily at the zvex lo fi junky, which i guess could be considered a chorus-type of effect. hoping for a stereo version sometime in the future, i love what i've heard out of this pedal.
bandcamp
youtube
soundcloud
instagram
Top

Vorg wrote:Strange but true: ask any pro-guitarist about his favourite chorus. 70% of them will answer: "Arion Stereo Chorus"!
Mike Landau totally relies on it, in fact it doesn't sell cheap anymore, check the net!

I bought one in the 80s to fatten up my DX9 - I think it was all I could afford I was surprised how well regarded they seem to be by some. 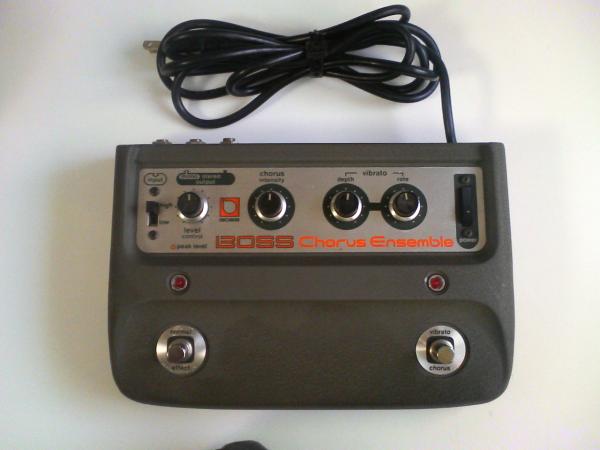 I love my earthquaker devices - sea machine. Worth checking out.
https://soundcloud.com/mr-bloor

someone in my area is selling one of these on craigslist. looks cool but I dunno about spending $450 on it.. when for another $50 I could just get a JC-120

But yes.. My first post here.. I am currently in the market for a chorus pedal trying to decide which one to get. Something to get Peter Hook Bass sounds, and also to use on synths/guitars.

but I've heard people say that for a good chorus effect you should do it in stereo.. looks like the sea machine is only mono? Still looks tempting even if it's only mono...
Top

“...I am merely a conduit, a kind of big hairy tool. I am just a plastic funnel connected to a Moog...”
Top

Pretty impressed with the tri-chorus algo on the TC nova modulator. I'm no chorus expert though. And you can run 2 of them for .....hex-chorus?!

this looked interesting, anyone try one?
http://www.pigtronix.com/products/quant ... modulator/ I liked the chorus on the roland tape echo, and I really really like the red witch empress. Only outboard choruses I've owned though.
Top

Any Boss Dimension DC2 users out there?
Top

udbhav wrote:TC Electronic SCF is worth a look.

Oh yeah! I need to get another of these. This one cleans up in the chorus department. Whenever I hear a guitarist with a chorus sound I really like, they're almost always using one of these.

I went to a guitar shop yesterday to try out chorus pedals, and of what they had available (i tried some stuff from MXR, EHX, Wampler, Mr. Black) The TC Electronic SCF really stood out from the pack. Definitely considering picking one up but I still want to try out a couple others like the Sea Machine. But yeah wow, TC Electronic SCF

nice pedal for sure!
Top

thetwlo
I'd like to know if the two BBDs are modulated in opposite directions and if one is routed to the Left output while the other is routed to the Right.
I wonder which BBDs are used. I guess MN320x or equivalents. This would mean the BBDs have to run off 9V while rest of the pedal can run off 18V.
Can't seem to find any of this information anywhere.
Manual is kind of vague. A block diagram would help.
Top
Post Reply
82 posts