I've been building analogue synths for years, but decided I needed a new challenge, so I bought a cheap Chinese 12 string guitar kit.

Out of the box, nothing is finished - both the body (Basswood) and neck (Maple/Maple fretboard) is just bare sanded wood. I decided to top the body with bookmatched flamed Koa veneer (at this point I have to say that I've never attempted to veneer anything before).

I started by sanding the body down even further with 800 grit W&D. Using veneer tape I joined the matched Koa pieces together and just drew around the guitar shape along with a 10mm overhang all the way around.

The right hand side was glued on first using Titebond II, a B&D Workmate and a bunch of clamps and left to dry for 24hrs. I did the same for the left side, but unfortunately I didn't notice that the veneer slipped a fraction while clamping, so the bookmatching isn't quite perfect - It's out by 2mm.
The excess veneer edges were trimmed off and the top sanded with 800 followed by 1200 grit for a very flat and smooth finish.

I didn't want to mess around with lacquers, as I don't have anywhere to spray, so I used Rustins Plastic Coating on a few test strips and was surprised at the finish I could get. It took 10 coats applied with a foam brush (2 hours between coats - no rubbing down) to build up a decent thickness. It was left to fully cure for 48 hours.

The finish was pretty "lumpy" at this point and I seriously thought I'd messed the whole thing up, but I started carefully flattening down with 800 Wet & Dry and a mild soapy solution until I couldn't see any glossy "dips" in the finish, that was followed by 2000 and 4000 until I had a smooth and slightly gloss sheen. From then on I just applied T-Cut Car Polish with very little pressure, then buffed it up with a polishing cloth.

I still have the back of the body to do in Arctic White cellulose paint - again it'll have to be applied by brush, but if I can get the same degree of shine, I'll be happy, I just need to be careful around the binding.

The supplied black pickguard was a seriously bad fit, and didn't look right, so I just bought a sheet of white single ply and cut my own, although I'll re make it in WBW 3-ply.

The neck... I have no idea what to do with it, but I'll probably use the Rustins again, but sand it to a satin finish. I've already cut the headstock to something similar to the Custom Shop Tele XII.

So, after two weeks work, that's where I am at the moment ... I'll fill in the rest as I go along. 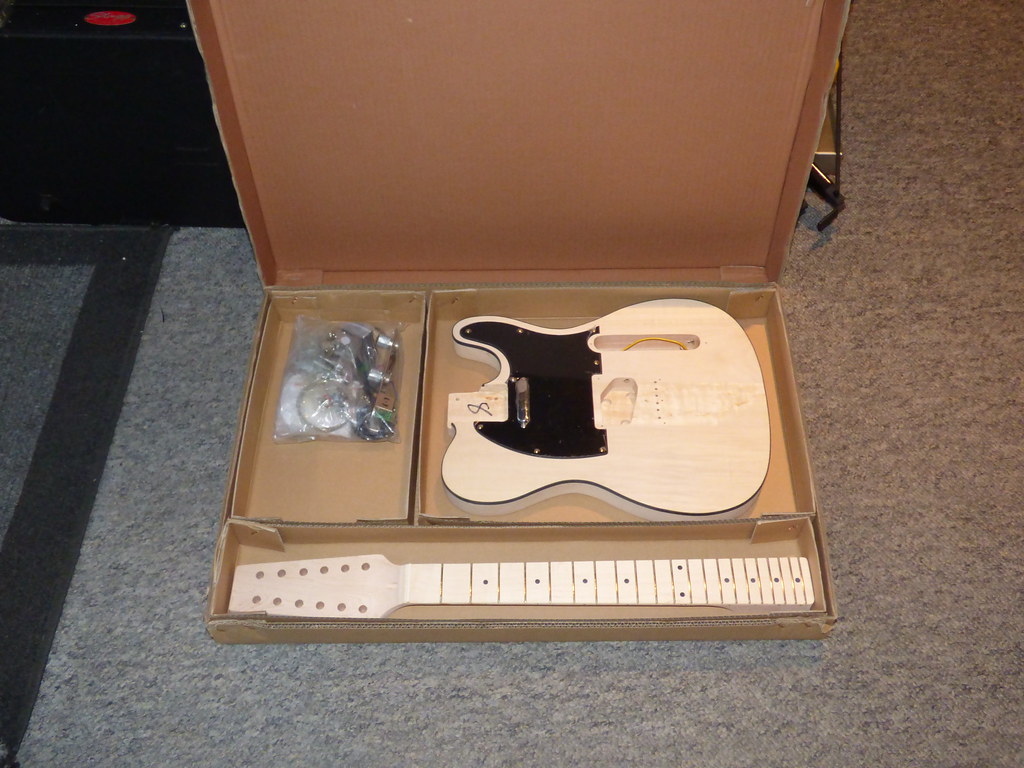 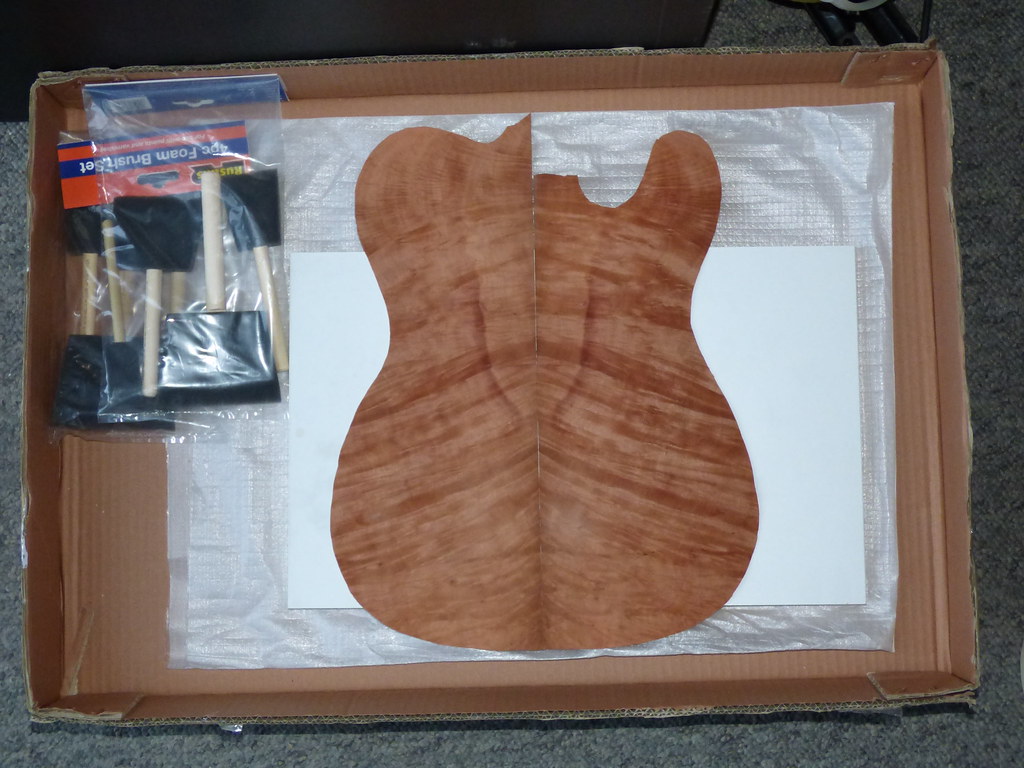 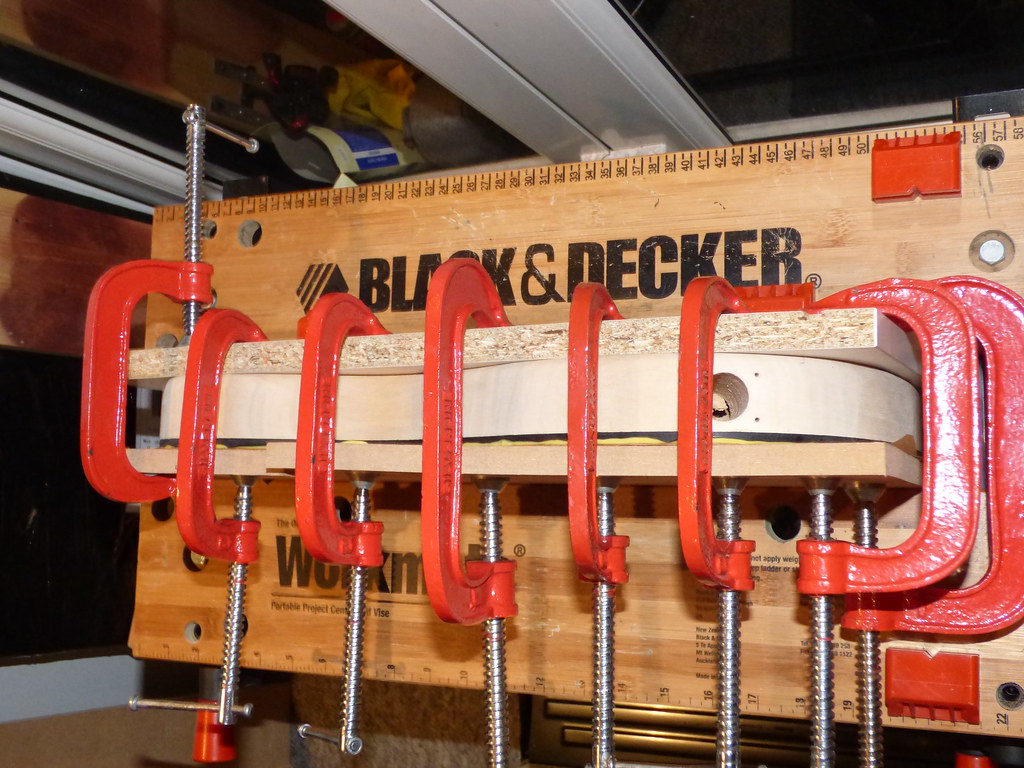 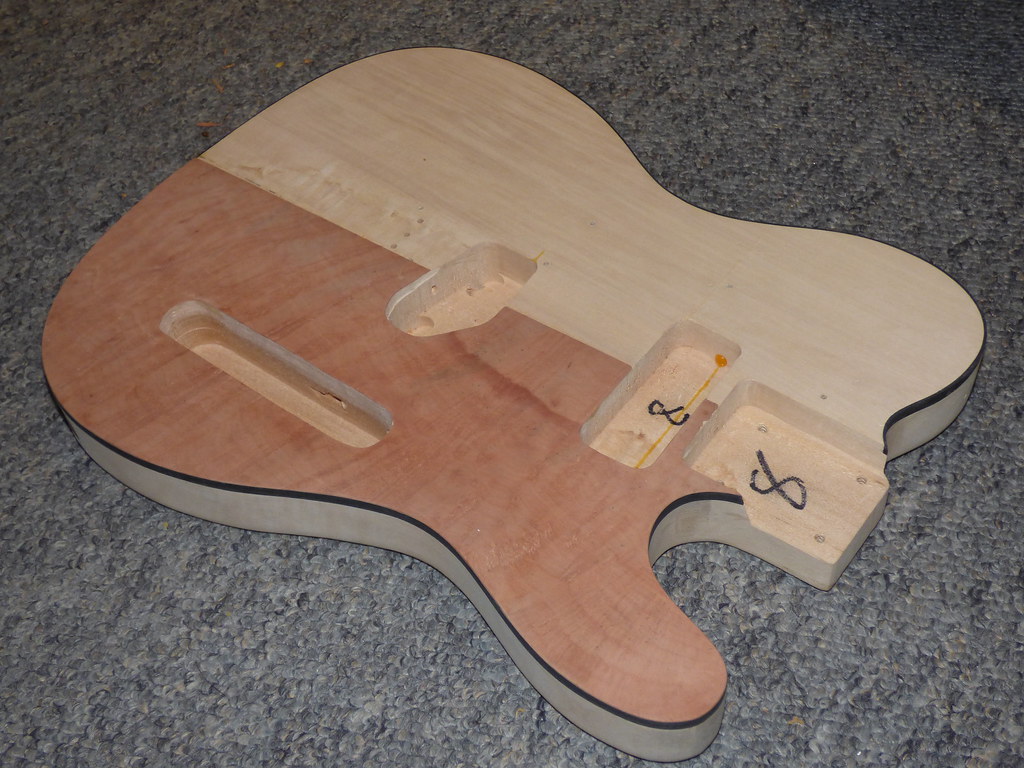 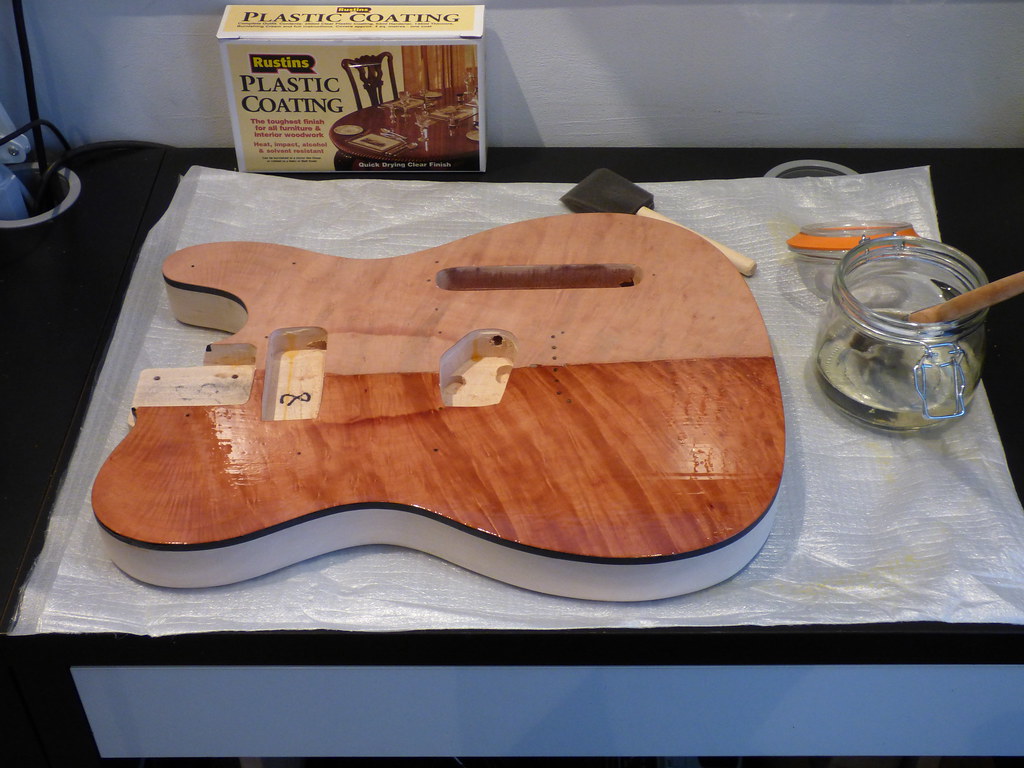 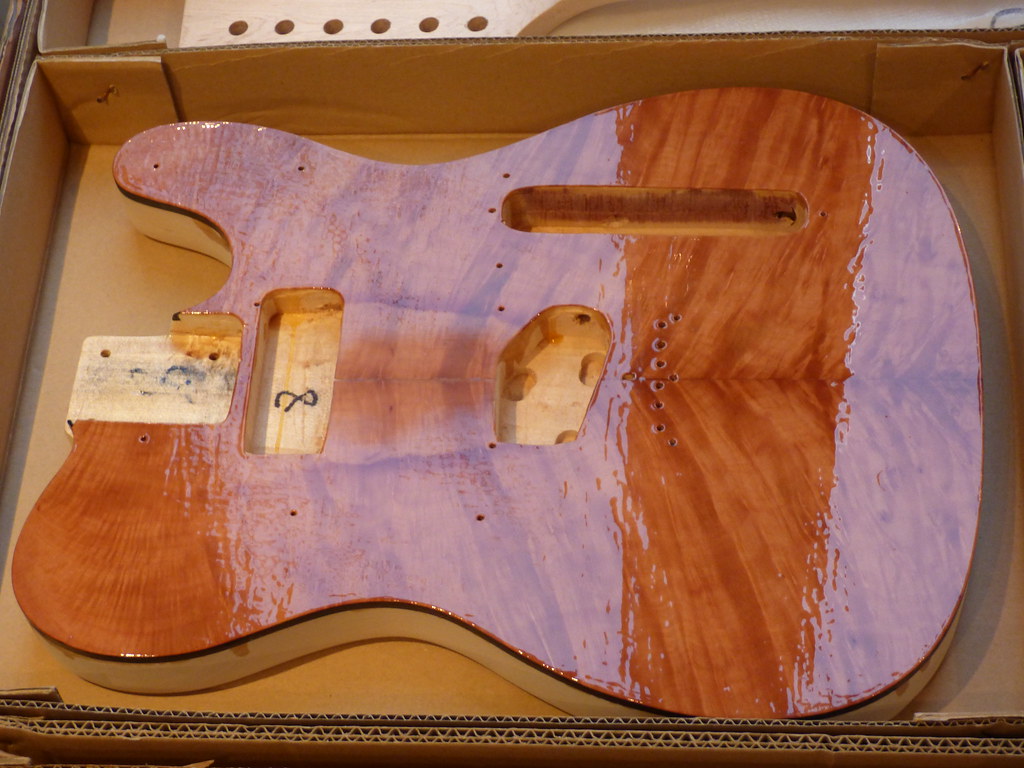 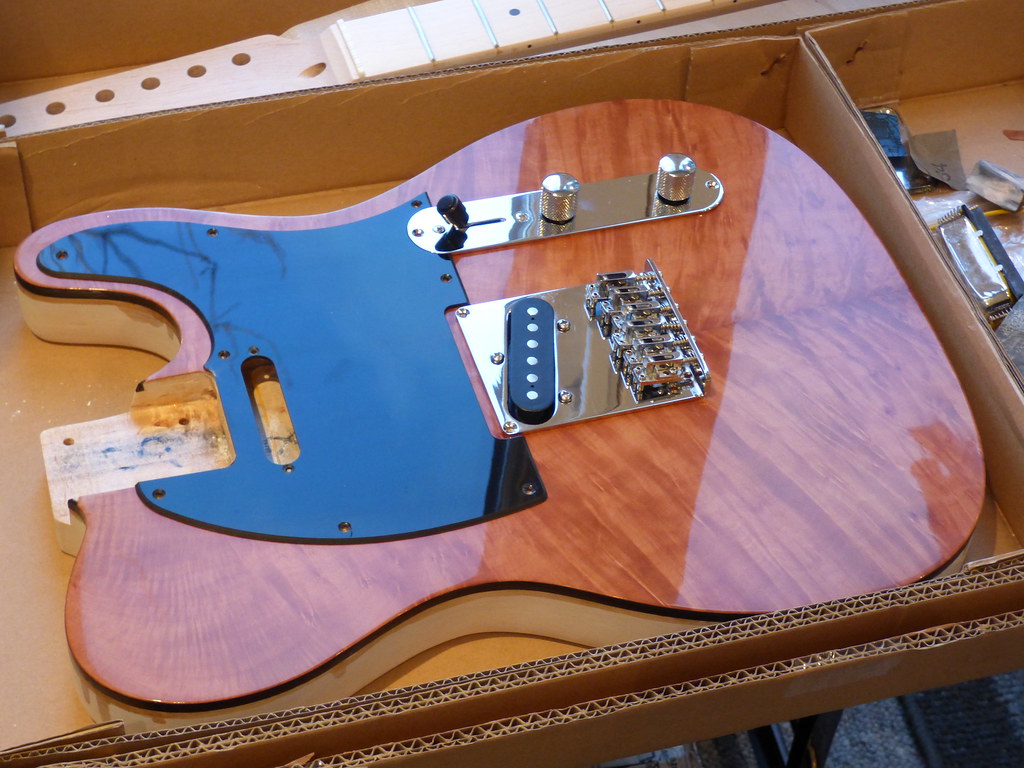 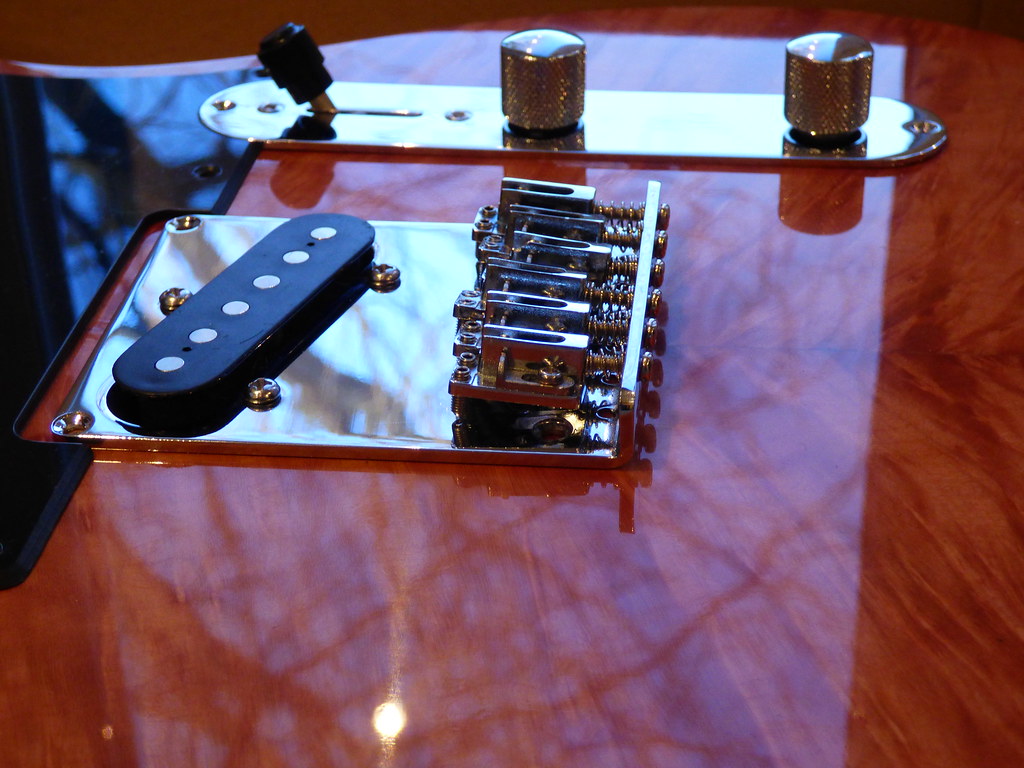 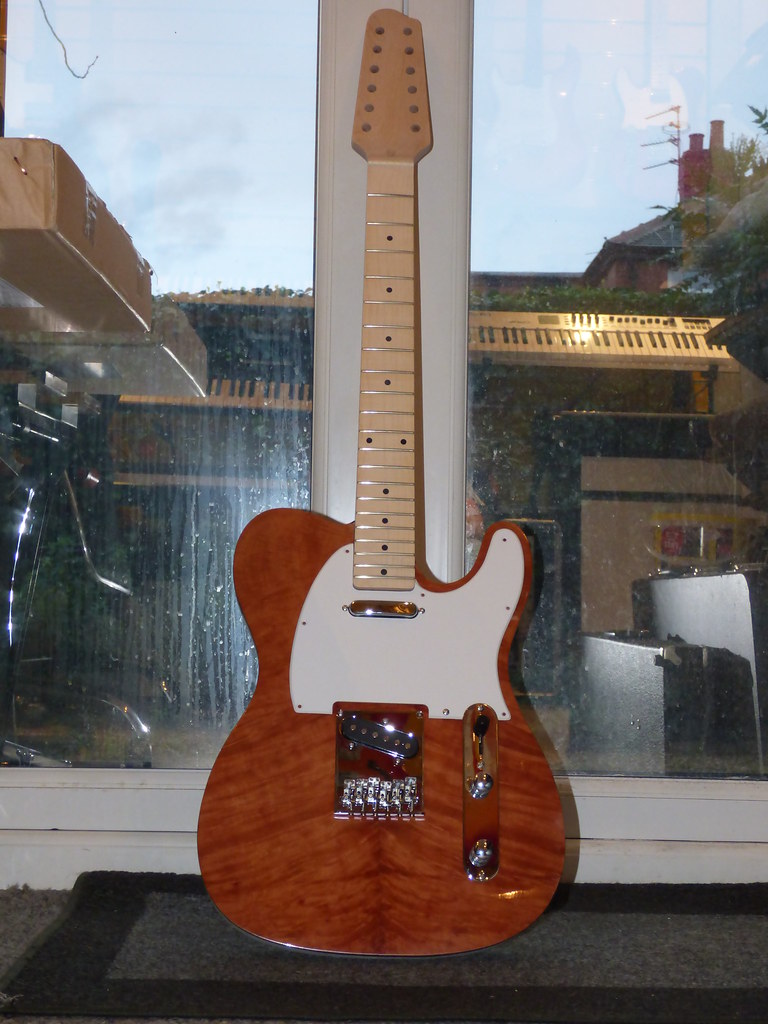 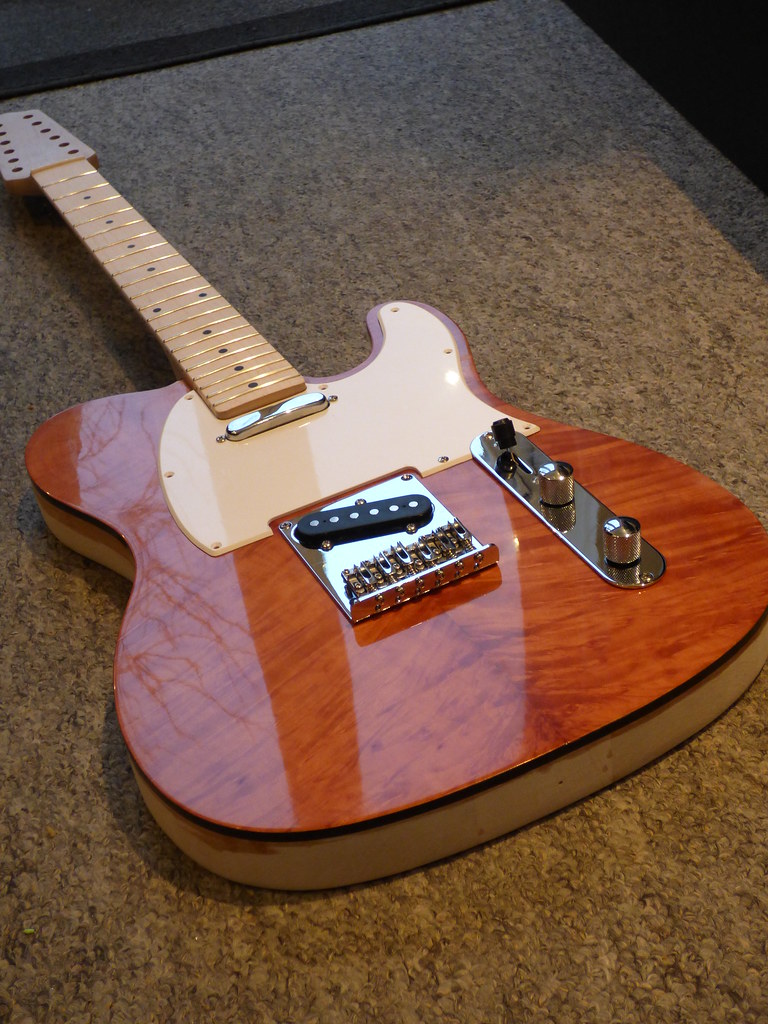 Wow! That veneer looks great! I've built a couple of tele's, great fun, but nothing as beautiful at that is heading towards. Mine usually look like they've just about survived the apocalypse. They sound good though. What PUs are you going for? I've used Bareknuckle blackguards before and been really happy with them, but not sure whether they'd be good on a 12 string.
Top

The supplied Pups are cheap ceramic ones, really awful, but I'll temporarily replace them with a spare pair of semi decent Wilkinson Alnicos that I've got.

Once it's all completed, I'll see how it sounds and decide if any further changes need to be made.

I'm just off to pick up the white nitro & primer - Hopefully it'll keep me busy over the next few days, while the rest of the family argue & battle through Xmas