I'm surprised that there's hardly any mention of the Axoloti DSP (€65/£50) here on Wigglers.

I came across it purely by accident a few weeks ago, so I thought I'd get one to mess around with - It turns out to be an amazingly useful board... Just fire up the editor and create your synth/effects etc (much like the old Nord Modular), download the patch onto the board, disconnect from your Mac/PC, and away you go - a completely independent modular synth that you can edit via CC's. Very clean sound with better anti-aliasing than some commercial VA's out there.

I've just built it into my Code 61 controller. 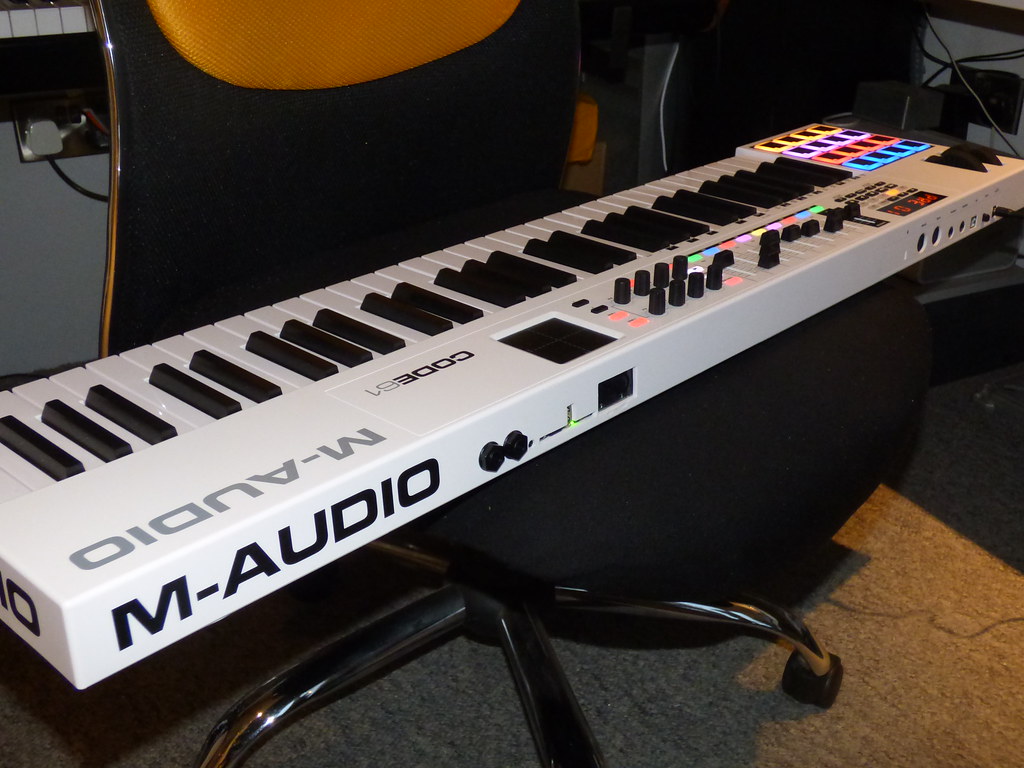 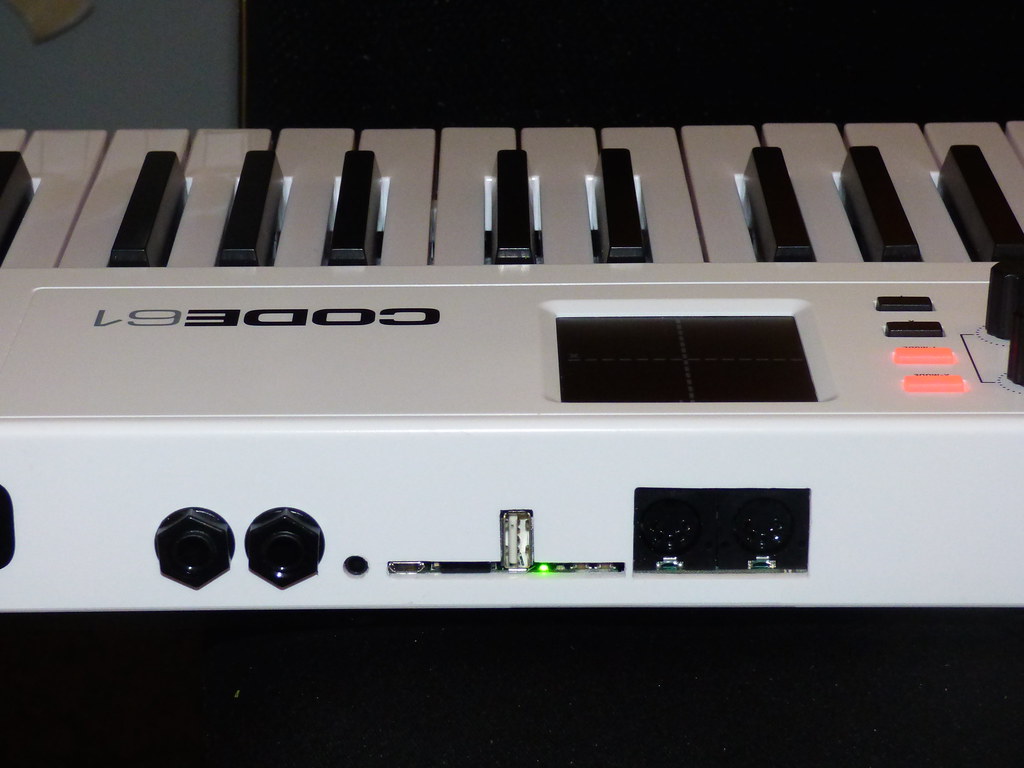 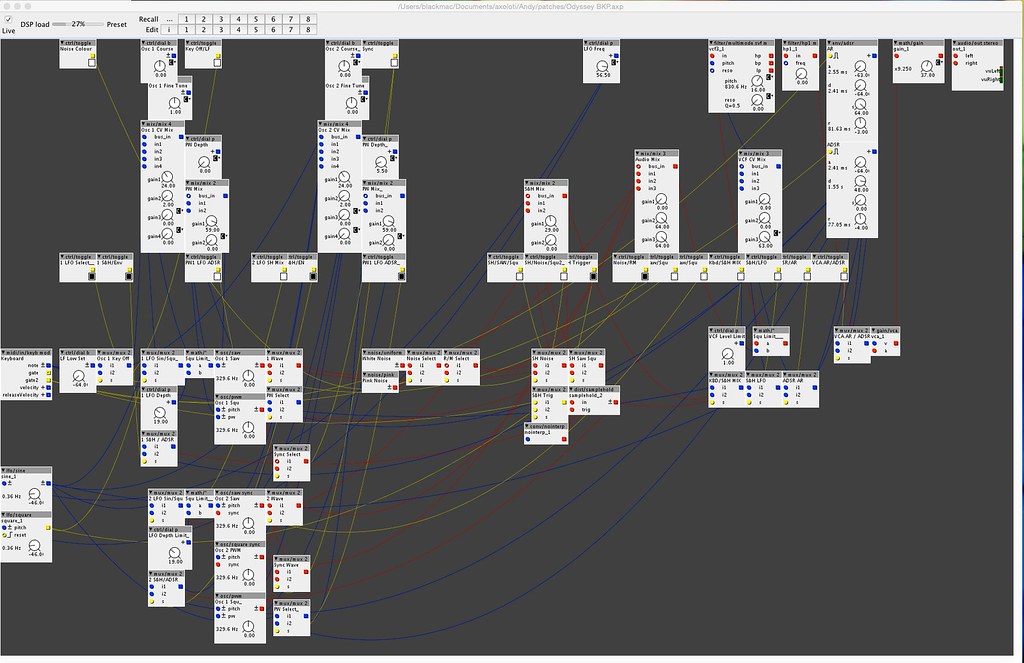 I have two of them myself, from the crowdsourcing campaign Johannes did. But yeah, it does remain a little quiet around the Axoloti. Still need to put mine behind a panel.
Top

I have one too.
After a couple of simple patches, I can say that this is a great little board.
Still in a paper box (:D), because I don't know what to do with it...order a plei enclosure, or put it into a 1U rack, or into a simple MIDI keyboard, still thinking

Yeh more people need to know about Axoloti, the hype went down as there was supply problems after the kickstarter, but that seems to be all sorted now. I guess people are waiting for that killer demo before jumping in.
Top

Oh ... I have one of these as well from the Kickstarter but never did anything with it. Is there a way to power it from a Eurorack bus board?

flx wrote:Oh ... I have one of these as well from the Kickstarter but never did anything with it. Is there a way to power it from a Eurorack bus board?

I have one, it's very cool but I also haven't yet found what to do with it.

I think it can be powered straight from 12V (it has its own regulators for 5V and 3.3V). Inputs and ouputs need level shifting to make them modular level.

Lots of info and example patches on the axoloti forum: http://community.axoloti.com/
Top

this has excellent potential and its already WAAAY funded - pretty cool
look up!
Top

The most impressing thing with this Bela is the "PD to Bela convert".

But, Axoloti is much moooooore fun.
Top

I have one and have been working with Paul to Eurofiy mine. Its pretty far along with only a couple of minor bugs to fix. I have documented my build process here:

I love the environment and the board, and the community is pretty strong also. The board itself really feels like it was designed to be hacked. I have so many ideas I want to do with it, and really not enough time. For me the biggest drawback is trying to get my head around all the fixed point coding/ number representation if you want to make objects for it. Luckily a lot of other smart people have been figuring it out and doing a great job of putting out custom objects.
Top

It's a lot of fun with the control panel - bear in mind this video was recorded with the headphone jack plugged into a crappy old TV in a holiday home!

snaper wrote:The most impressing thing with this Bela is the "PD to Bela convert".

Pd to Bela depends on heavy/enzienaudio
which is NOT open source, or downloadable, only available as cloud service.
And only supports a limited subset of Pd objects.
Top

Anyone using the patcher software with Ubuntu?
http://www.randomfaktor.com
Top

i love mine! looking to buy a few more if anyone wants to get rid of theirs

I wish they had developed the Axolotl Control PCB too. It seems to have faded away and is no longer on their site.

I'm pretty sure the main developer on the axoloti project is still working on it. . don't quote me on that, but i remember reading that on the axoloti forums. and the LED screen and interface is definitely implemented in the software already ("remote" in the windows menu) so the hardware shouldn't be far behind..
Top

I have one. It actually sounds really nice. I've been lazy and haven't really done anything substantial with it yet since I have so much other stuff to finish. Will probably use it as a simple VA polysynth, or I might use it stand-alone. Would be very cool if it is powerful enough to do an entire set (might be).

I'm not sure how I like the level of abstraction with it yet, coming from a background with PD. In some ways Axolotl is much nicer though.

I only wish it had individual outs instead of stereo. It's the only piece of gear I have that uses single stereo ins/outs.

Thanks, It's nice to see support for something besides winblows and the fruit computer.

I've been wanting a Nord micro for some time and this looks like a much better substitute than something like a bunch of patch blocks. But to do a whole set I could see having something with a screen so I can see what patch I'm on or get a bit more visual feedback would be kind of crucial. If the Control or something similar were released I would jump on this pretty quick.
Top

Finally took my Axoloti out of its drawer and programmed an ambient synth and audio processing patch. This thing is amazing!!! A modern Nord Modular indeed! Here's a quick jam with it and my DIY Dronebox:

Just found out about this recently - will be ordering at least 2.
flickr cloud of sound touyube NOT A MODERATOR ANYMORE
Top

Finally ordered one, and immediately thought use for a second one... Getting unreasonably excited about the possibilities, and the thought of designing a custom control surface for this one.
Never stop loving music
Top

axoloti alpha tester here o/
really love the project and learned a lot by tinkering around with it. Taking a break from it but can't wait to return - made a sq80 waveform oscillator synth with fm and weird memory allocation automation.

Also the Axoloti Control is still being worked on.
Top
Post Reply
191 posts